skip to main | skip to sidebar

My first job was at Hooters

Well one Thursday as we left the Books-a-Million parking lot I had an epiphany, “Why not Hooters” I shouted. This startled my friend who was in no mood; he was on a serious job search. So I grabbed the steering wheel & forced him into the Hooters parking lot. We didn’t have a plan for Hooters we had a plan for stocking shelves. Never the less we just went with it. I walked through the door & asked to speak to the manager. After a few minutes of talking it turned out that they just happened to have two openings in the kitchen & we had just filled them. Holy $%*! we were going to work with Hooters girls.

Take action: Sometimes you just have to act, even if you don’t have a well-crafted plan. You take the chance & act on it.

FYI my first assignment at Hooters was to shuck oysters at the Derby Bikini Contest & it beat the hell out of stocking shelves.

What's your story?
Posted by Corporate Playbook at 10:28 PM No comments:

Worldwide Panel LLC, a small market-research firm, is getting flooded with résumés for four vacancies in sales and information technology.

However, officials expect to reject numerous applicants after asking them: "What is your greatest weakness?" Candidates often respond "with something that is not a weakness," say Christopher Morrow, senior vice president of the Calabasas, Calif., concern. "It is a deal breaker." 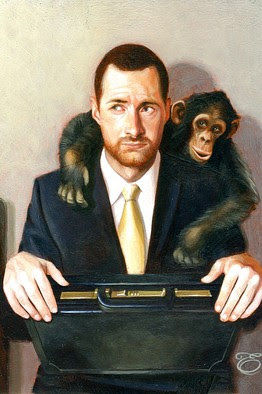 The weakness question represents the most common and most stressful one posed during interviews. Yet in today's weak job market, the wrong answer weakens your chances of winning employment.

Some people offer replies they mistakenly assume that bosses love, such as "I am a perfectionist." That response "will be used against you" because you appear incapable of delegating, warns Joshua Ehrlich, dean of a master's program in executive coaching sponsored by BeamPines Inc., a New York coaching firm and Middlesex University in London.

A careful game plan could help you cope with the shortcoming query in a way that highlights your fit for a desired position. Job seekers who field the question well demonstrate that they can "take initiative and improve themselves," Mr. Morrow says.

The key? Thorough preparation. Career specialists suggest you take stock of your weaknesses, focusing on job-related ones that won't impede your ability to perform your duties. Tony Santora, an executive vice president for Right Management, a major outplacement firm in Philadelphia, says an information-technology manager flubbed a 2007 interview by choosing a personal foible as his reply: "My true weakness is that I am a terrible cook."

Rehearse your responses aloud, role play with a friend or videotape yourself -- but don't memorize your words. As you review the video, look for aspects "you would like to change so you can continue to get better as you practice," says Peggy Klaus, a leadership coach in Berkeley, Calif.

The IT manager changed his tune after practice sessions with fellow job seekers and a counselor in Cincinnati for Right Management. He instead said he worked such long hours that he found it difficult to stay current with world events. So, he spent 30 minutes every evening catching up at home.

When the manager pursued an opportunity at a global drug maker, his revamped response "really resonated with the interviewer," says Mr. Santora. The manufacturer hired the man.

It's equally important that you consider an employer's corporate culture. While being interviewed by a start-up, "you could say, 'My weakness is I get bored by routine,'" says Ben Dattner, a New York industrial psychologist.

Last month, an aspiring executive director of a nonprofit group in suburban San Francisco nearly jeopardized his selection because his reply to a variation of the weakness question ignored one of its core values, according to Ms. Klaus, a board member there. Near the end of his interview, she wondered whether he might have problems with any aspects of the job. "No, I am confident I could do it all," the prospect declared.

A sample of wrong answers to the most common interview questions:

"I have no weaknesses"

"I am a workaholic"

"I am impatient with incompetent people"

"I lack judgment when I'm under stress"

"I sometimes make mistakes with my work"

"I can't tolerate trite interview questions like this one"

His flip comment dismayed Ms. Klaus, because she felt he lacked awareness of his weaknesses. She says his response raised doubts among board members that "he would be able to take critical feedback," an attribute the organization values highly.

Because the man was well-qualified, the board gave him a second interview -- and demanded a fuller explanation of his weak spots. He said he had been "unprepared for that question and nervous about coming out with a big fatal flaw," then described his tendency to make decisions too fast during workplace crises. Board members' doubts disappeared, and they picked him for the nonprofit's top job.

Ideally, your reply also should exclude the word "weakness" and cover your corrective steps. Dubbing your greatest fault a "window of opportunity" signals your improvement efforts should benefit the workplace, says Oscar Adler, a retired Maidenform Brands sales executive and author of the book, "Sell Yourself in Any Interview." For instance, he suggests, a salesman might note that he sold more after strengthening his facility with numbers.

When an interviewer pops this nerve-wracking query, your body language counts as well. The wrong nonverbal cues undercut your credibility. Certain candidates hunch over, glance furtively around the room or wring their sweaty palms. "They sort of look like they're being asked a question they can't handle," says Mr. Adler.

For the same reason, you seem thoughtful if you pause before responding. But don't wait too long. "If you're going to take a minute," Mr. Morrow cautions, "I've just identified your weakness."

Posted by Corporate Playbook at 8:05 AM No comments: 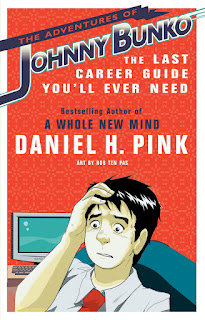 When was the last time you read a comic book? Well for me it was last night & it was totally worth it. I was recently turned on to Dan Pink's latest book The Adventures of Johnny Bunko- The last career guide you'll ever need http://www.johnnybunko.com/ while attending a authors forum he was hosting.

Dan Pink author of Free Agent Nation & A Whole New Mind has broken the mold for traditional career development books (the first American business book done in Japanese style Manga) - Johnny Bunko is a quick read & provides no fluff advice. It breaks down the career search into 6 lessons (yes I'm going to give you the lessons but you'll still need to read the book). Here are the take a ways from Johnny Bunko:

2: Think Strengths not Weakness ( how often have you been told to work on your deficiencies, focus on the weak points to turn them into strengths has been the conventional wisdom & it is wrong. Don't worry about your weaknesses focus on your strengths otherwise you end up mediocre & miserable)

3: It's not about you ( Use your strengths not for self actualization but to serve your customers)

4: Persistence trumps talents (those who stick to it will beat those who coast on natural talent, so you may not have the best GPA but if you focus on your strengths & persists you will beat your more talented competition)

5: Make excellent mistakes (you may have heard the old adage if you're going to fail, fail big. Well there is truth to that. You can't be afraid to fail if you don't take chances or don't take risks that is the failure)

6: Leave an imprint (no you don't have to rescue puppies & save the world although that would be great, but do something that impacts others that leaves an indelible mark on those you work with & impacts something larger than yourself)

Click on the link below to pick up Johnny Bunko:

Links that lead to things better than this blog

Corporate Playbook
I’m the Chief Sales Officer at The Corporate Playbook LLC, www.thecorporateplaybook.com The Corporate Playbook was created by athletes for athletes our mission is to connect former athletes with growing organizations. Through our innovative website we have career coaching tools, career search tools, Direct Placement opportunities & personalized profiles/networking opportunities (think Myspace meets Monster.com but for athletes only). My experience also includes: Recruiting for Fortune 500 companies in the healthcare, finance, pharmaceutical and advertising industries as a Director of Development with JobPlex, Inc. I’ve also served as a District Sales Manager for Yellow Book, USA. My focus was on hiring, developing and mentoring. Working on the hiring sides of a sales organization, I bring a tangible real world perspective to the challenges faced by today’s hiring mangers. I'm a graduate of the University of Louisville with a B.A. in Communications. As a football letterman at the UofL, I was appointed to the athletic director’s honor role, while winning back to back conference championships and competing in four bowl games & a recipient of the Johnny Unitas Scholar Athlete Award.